How LPWAN is becoming a pillar in IoT

There are two types of wireless communication technologies in the IoT and M2M fields:

1. Short-range networks such as WiFi, Bluetooth or RFID (which have a range of anywhere between a few centimetres to a few hundred metres)

2. Wide-area networks, which can work over distances of up to several thousand kilometres via networks of antennas. 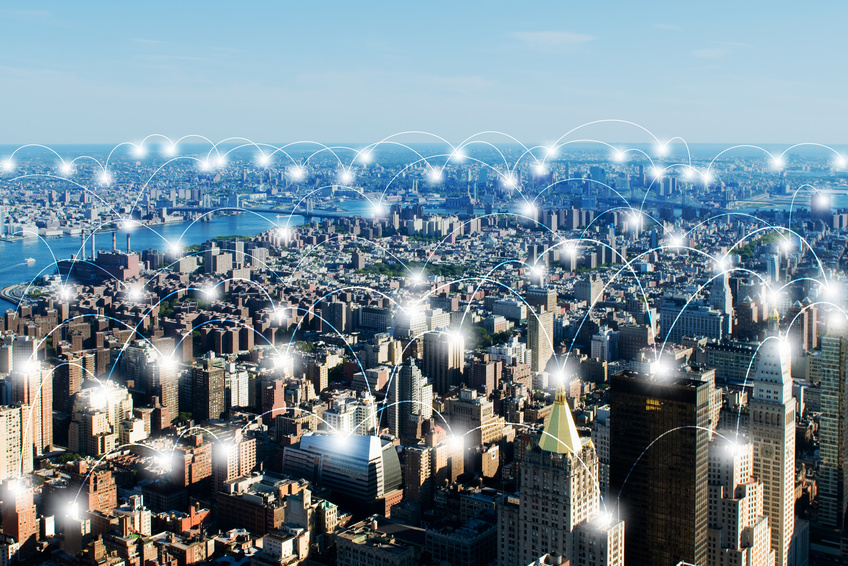 The standard mobile networks like GSM or GPRS  used for M2M fall into this second category.

However, for applications using multiple sensors to communicate very small amounts of data at low speeds, mobile networks are a disproportionate solution – and this is where LPWAN come in.

LPWAN : the rise of an IoT-specific network

For several years now, the industry has been developing a new kind of medium- and wide-area network for the IoT, called LPWAN (Low-Power Wide-Area Networks), which have been created as a pre-emptive solution for the planned phase-out of GPRS networks.

That being said, LPWAN is not suitable for all applications: it is intended for low-power devices with a limited memory capacity and processing power which require a battery life of several years.

Where higher volumes of data and rapid message transmission are required, other technologies such as M2M SIM cards are a better solution.

The expension of low-speed networks

The booming IoT market has led to increased use of LPWAN. These networks fall into two categories:

1. Non-cellular networks like SigFox and LoRa that are specifically designed for the IoT

2. Cellular networks that use existing mobile networks like LTE-M and NB-IoT.

Created in 2009, SigFox is a ground-breaking French IoT company specialising in M2M.

According to the operator’s figures (2), its own eponymous low-speed network currently has over 2,000 antennas across France, and covers 94% of the population.

If users opt for this technology, then emitting/receiving devices  must be certified by SigFox. This guarantee compatibility and makes for easy interoperability between covered countries (dodging roaming-related issues in the process).

SigFox’s main competitor is LoRaWan, which specialises in transmitting small data packets of between 0.3 and 50 Kbps (3).

This protocol was designed by the French start-up Cycleo, then acquired by Semtech, the company that set up the LoRa Alliance.

This association is made up of operators and manufacturers who want to promote the development of compatible networks. LoRa is commercialised via operators such as Bouygues and Orange, but remains an open-source network that can be developed and used by any business: the only condition is that they must use LoRa chips.

This means that users can switch from one operator to another and enjoy the benefits of roaming agreements if they use companies who are members of the alliance.

Although the network is still working on solidifying roaming agreements for allowing IoT data to be transmitted internationally, its strengths lies in its GPS-free geolocation, which is much more accurate than SigFox (between 20 and 100 metres depending on antennas versus 10 to under 1 km respectively).

Although LoRa and SigFox technologies form a significant part of LPWAN today, mobile network operators aren’t far behind in rolling out cellular LPWAN for M2M applications.

According to ABI Research, the competition is likely to get even fiercer, particularly in the fields of transport and logistics, power distribution and management, smart cities and smart buildings, industrial automation and smart farming (4).

Its aim is to mitigate compatibility issues in M2M applications and reduce the cost of manufacturing communication modules.

LTE-M, which is used by nine of the world’s largest operators, has been  successful recently, with Orange in particular testing the low-speed network alongside LoRa. LTE-M uses the same protocols as 4G and offers sustained data transfer rates, low latency and roaming (5).

Although LoRa and LTE-M are designed for the same applications, they are in fact complementary.

LTE-M offers higher speeds of up to 1 or even 10 Mbps, compared to a few dozen Kbps for LoRa.

This means there are advantages to using LTE-M in terms of transmission speed and latency, but not when it comes to costs and power consumption.

NB-IoT technology is the beloved darling of telecoms industry giants such as Huawei and Vodafone.

It uses the 200 kHz frequency band previously used for GSM. NB-IoT is ideal for fleets with applications such as telemetry where a high volume of fixed devices are involved, a low volume of data is required, and transmission rates aren’t key to proceedings.

In the long term, if this technology sees large-scale development, NB-IoT could help to reduce costs compared to rival technologies. (6)

Against a backdrop of new technology constantly being developed and trying to establish itself in a highly competitive ecosystem, LPWA networks have revolutionised the IoT sector.

These medium- and wide-area networks are perfect for devices that must regularly communicate very small volumes of data at low speeds.

Each LPWA technology has its own competitive advantages and is suited to specific applications.

The real challenge is therefore to choose the most suitable solution to the issues at hand, whilst also considering the interoperability of the various types of technology.

How RFID, LoRa and M2M SIM cards are combined to leverage IoT projects

However, while radio frequency ...

How LPWAN is becoming a pillar in IoT

Where is LTE-M technology best for use?

Standard technology does not always ...

What LTE-M technology is available for smart objects? A closer look at LPWAN

In this article, we’ll be looking at ...